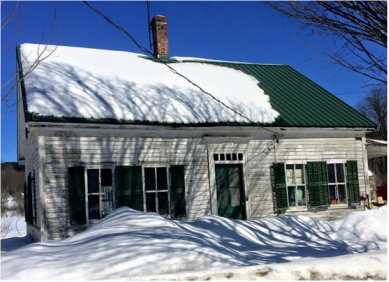 The Cummington Historical Commission purchased The Parsonage in 2013. Once renovated, the building will be part of the Kingman Tavern Museum complex.

The Parsonage is nearly 200 years old. It was built around or before 1821 by Hatch Noyes as Main Street in East Cummington was becoming a residential, commercial, and industrial center for the town. Noyes sold the house in 1821 to Beriah Shaw who in turn sold it to Robert Dawes in 1826. In 1839, it became the parsonage of the newly built Village Church. It served as a parsonage for 41 years. In 1880, it was sold to N.S. Stevens. Later owners were Ida McLellan who bought in 1888, Theodore P. Tower, 1919, and Henry Dunham, 1946. The Commission purchased the house from the Dunham estate.
(Deed information from Foster&Streeter,  Only One Cummington)